The 1300appentice awards see the acknowledgement and reward of those apprentices and trainees who have gone above and beyond in their chosen field. This year has been an exceptional year for award nominations with each nominee demonstrating a high level of passion and enthusiasm in what has yet again been extenuating and at times challenging circumstances.

A special thank you to our host employers, without your support and guidance, our shared apprentices and trainees would not have had the chance to shine.

1300apprentice would like to thank our major sponsor MEGT Apprenticeship Network Provider who have been sponsoring our awards for seven years.

Congratulations to all winners and finalists in this years’ 1300apprentice awards.

Select a name to read more about these winners. 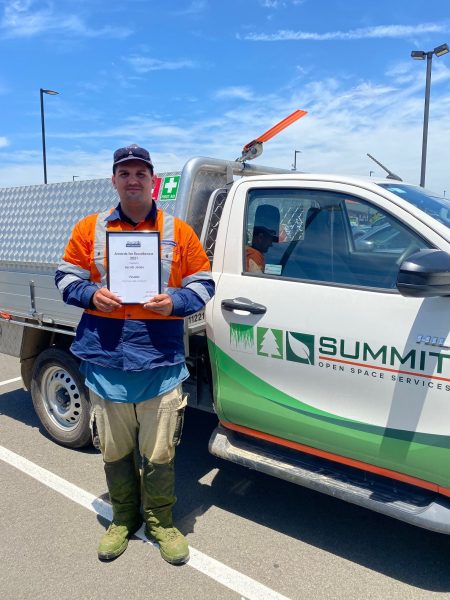 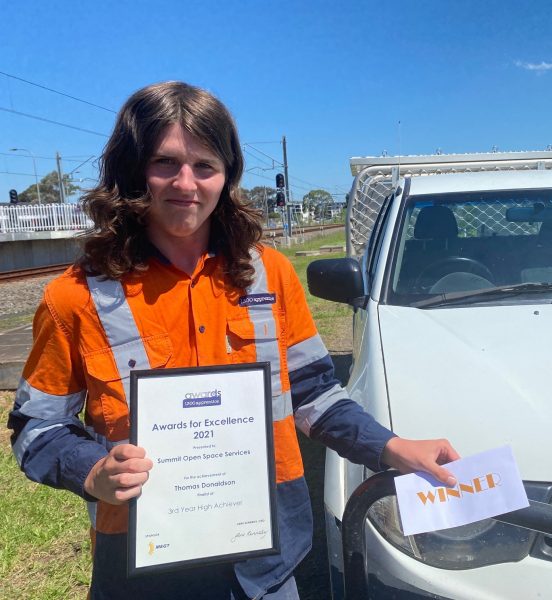 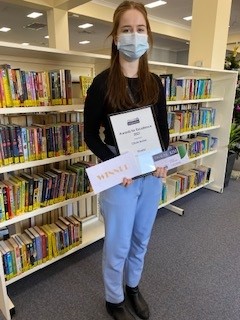 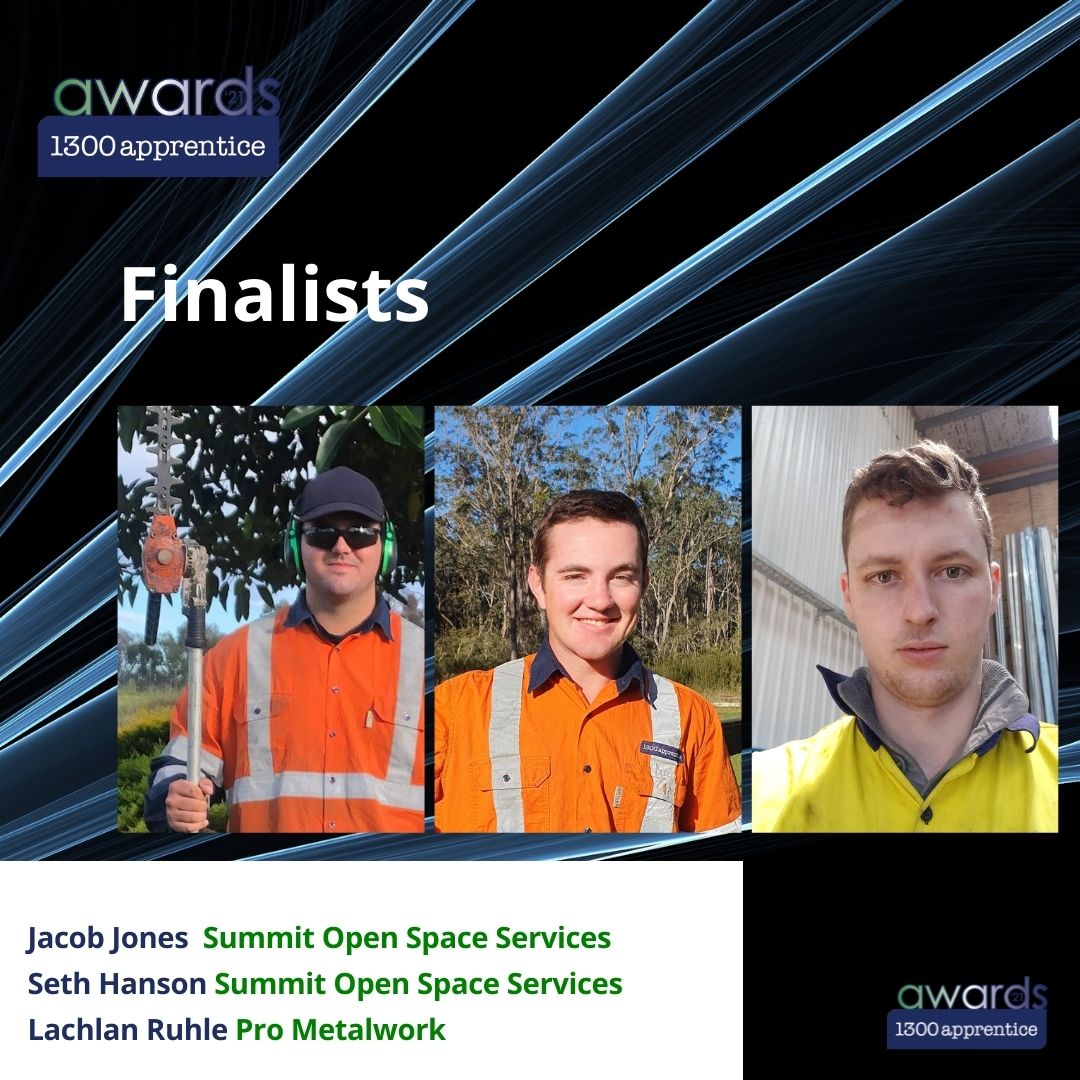 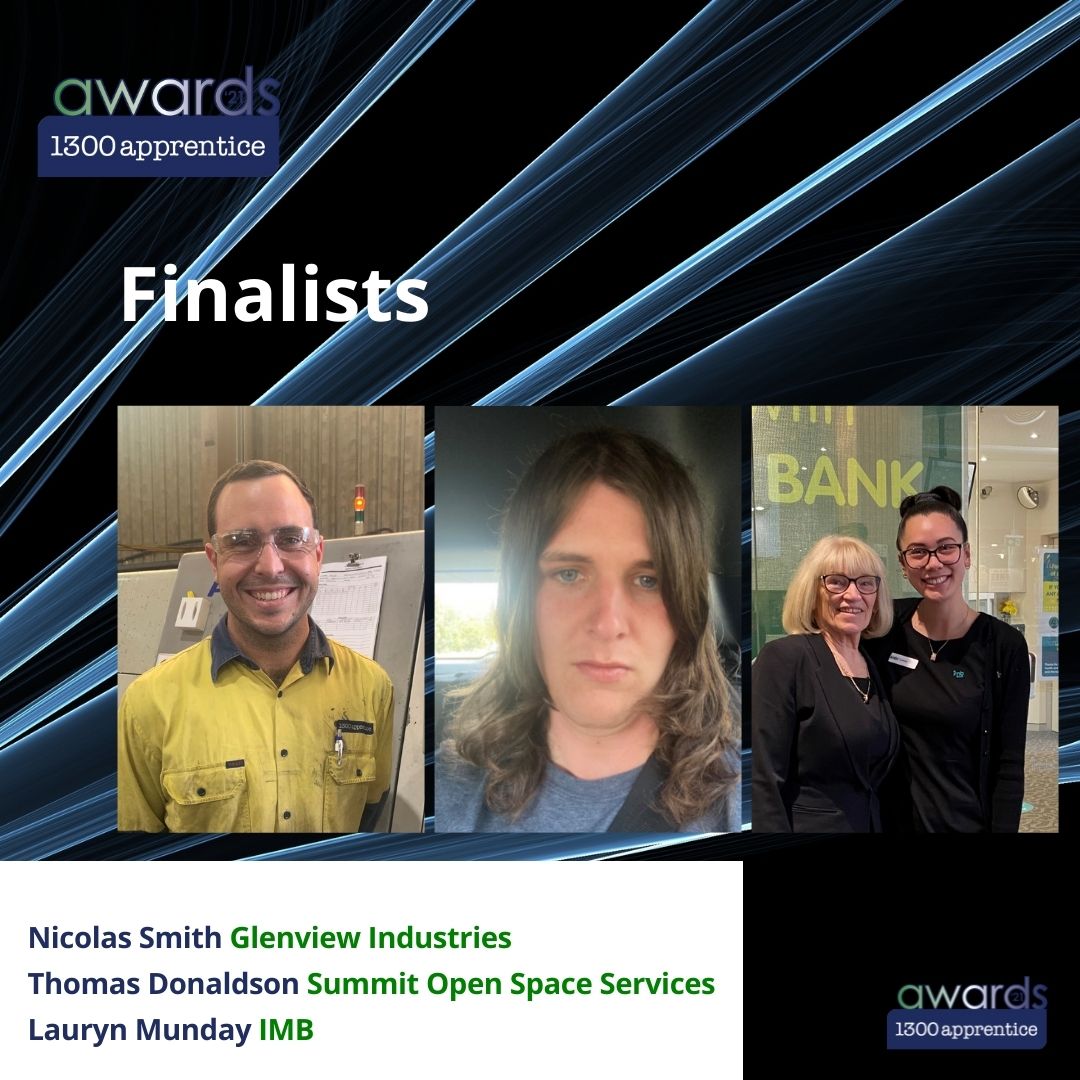 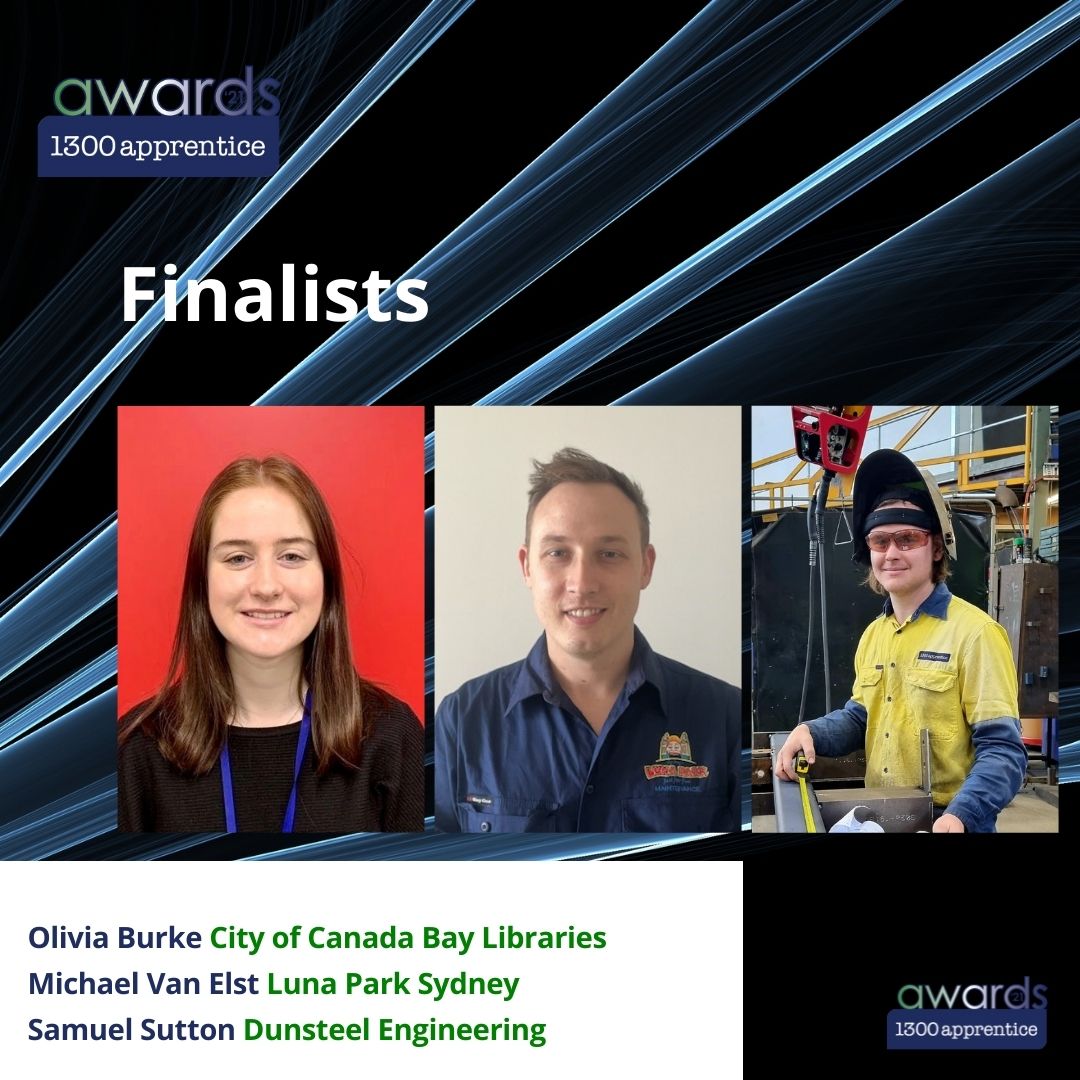 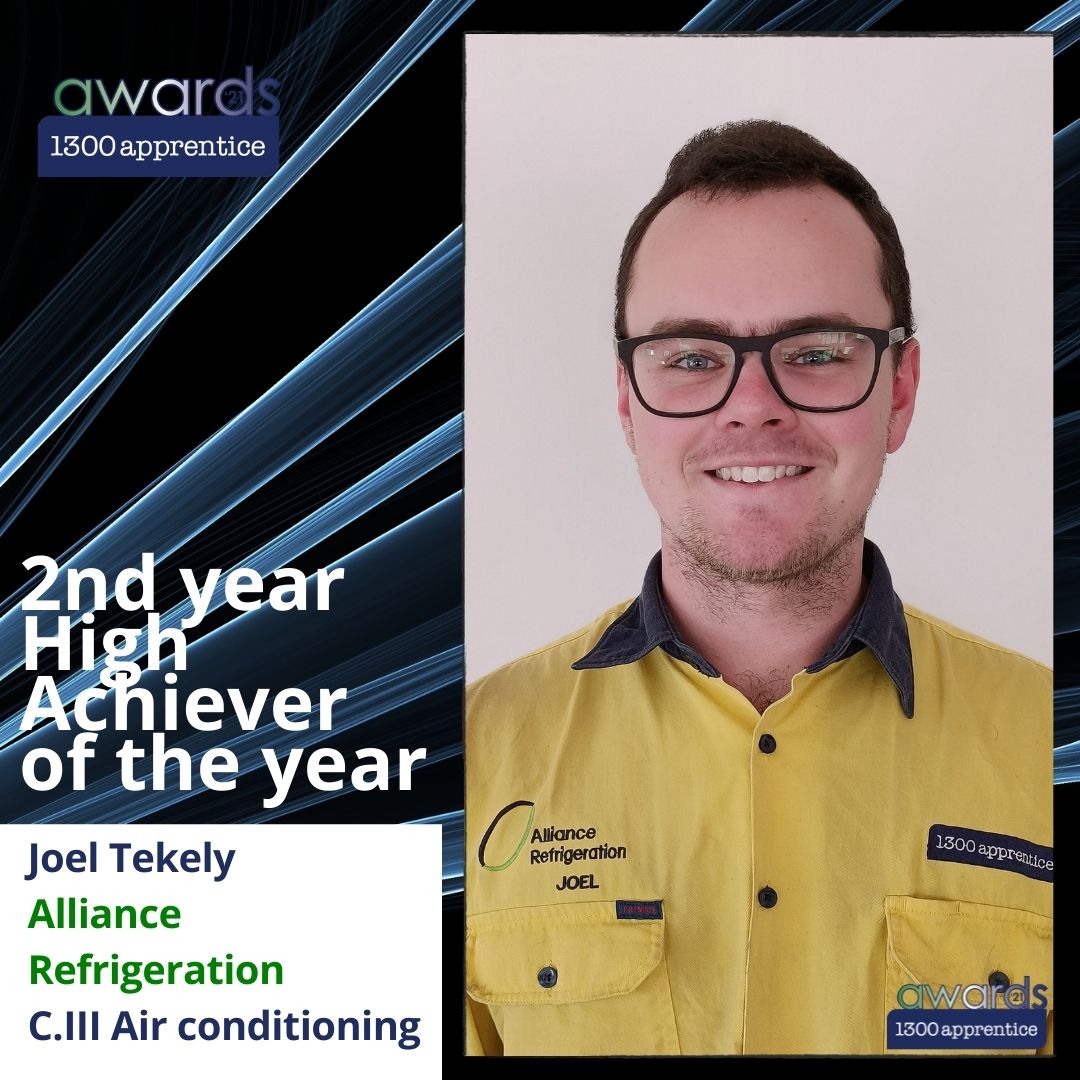 Joel’s passion for all things mechanical came at a very young age. It was a natural progression for him once he left school to commence an air conditioning and refrigeration apprenticeship.

Focusing on commercial refrigeration, Joel has always shown he is dependable, and team focused; often working night shifts, long hours and living away from home. Joel has received glowing recommendations from the company director and through to his supervisors and fellow colleagues.

Even when faced with adversity, Joel’s commitment to his apprenticeship, his host employer and 1300apprentice was to be commended. The director of Alliance Refrigeration has said “Joel’s attitude and approach to his work will catapult him into a position of great standing as a mechanic held in high regard”. 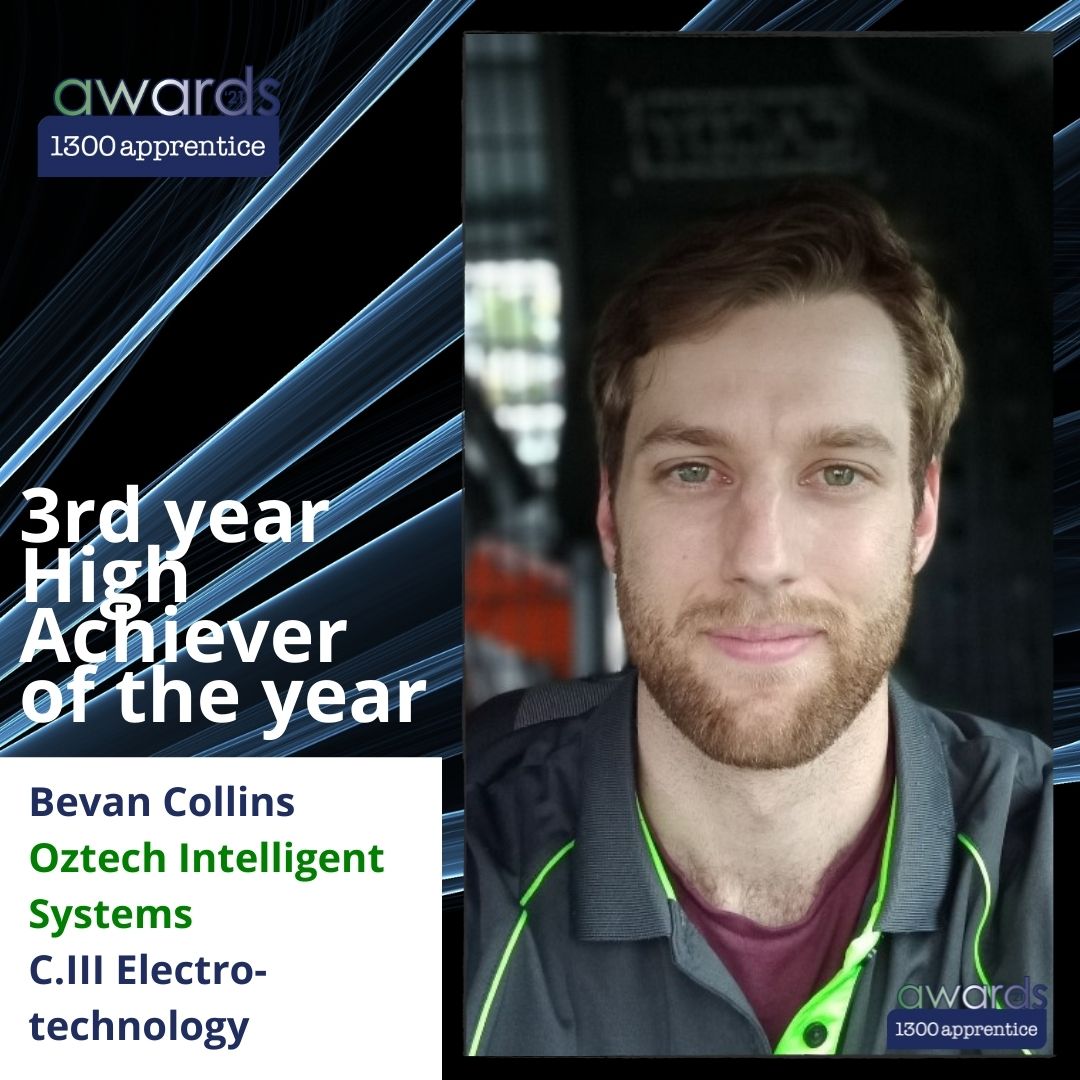 Bevan isn’t shy to the Vocational Education & Training industry, having already completed a Certificate III in Parks and Gardens in the next suburb to his regional home town Wallendbeen, a rural town with a population of 260 people. Shortly after completing his apprenticeship, Bevan relocated to Canberra wanting to pursue a career in electrotechnology. During this time, Bevan was hosted to an industrial based company for the first 12 months of his apprenticeship, which provided the foundation skills for the trade.

Bevan relocated to Sydney and continued his apprenticeship with a commercial based company focused on Building Management Systems (BMS) across multiple sites in Sydney.

Having completed an abundance of additional courses, Beven quickly became a valuable team member to his colleagues. Comments by his supervisors are that Bevan is 100% reliable, punctual, is good with communication and always uses his PPE.

Throughout his apprenticeship, Bevan has always strived to achieve excellence, this is also evident in his TAFE studies with comments from his TAFE teacher stating that “Bevan is a very competent student and has always performed well anytime I have taught him. Bevan indicates that he is understanding the topic and answers questions correctly when asked”.

Bevan enjoys the variety the electrical apprenticeship offers and the satisfaction that comes with completing a task to the highest standard.

Congratulations Bevan, the team at 1300apprentice look forward to supporting you through the remainder of your electrical apprenticeship. 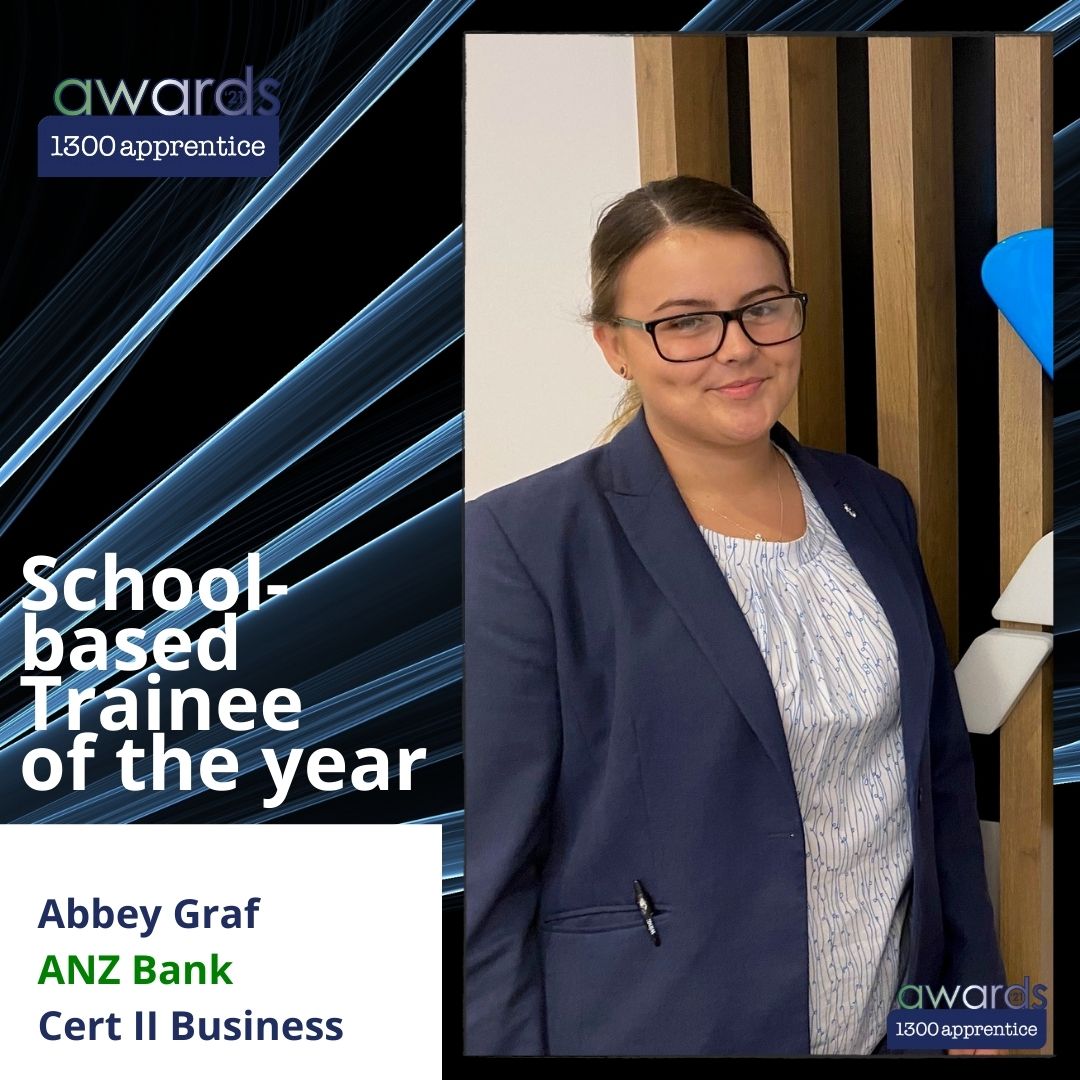 In year 10, Abbey was convinced that school wasn’t for her. It was the influence of her career advisor that led her to consider a school based traineeship, an opportunity to learn whilst earning and continue with schooling.

This was unchartered territory for Abbey and although nervous, Abbey took advantage of the opportunity and learned as much as she could to develop her interpersonal and workplace skills and quickly became a valued team member. Abbey developed an enthusiasm for helping others which was evident in feedback gained from customers at ANZ Bank, comments made were that Abbey was mature, professional and was quick to learn.

Abbey deems completing a school based traineeship one of the reasons for her successfully completing her HSC. The opportunity to break up the week with paid on the job learning experience kept Abbey focused and determined. Abbey was offered a full time traineeship with the branch upon successful completion but has chosen to continue studying and will be undertaking a Bachelor of Community and Criminal Justice in 2022.

The team at 1300apprentice wish you the best in your studies Abbey. 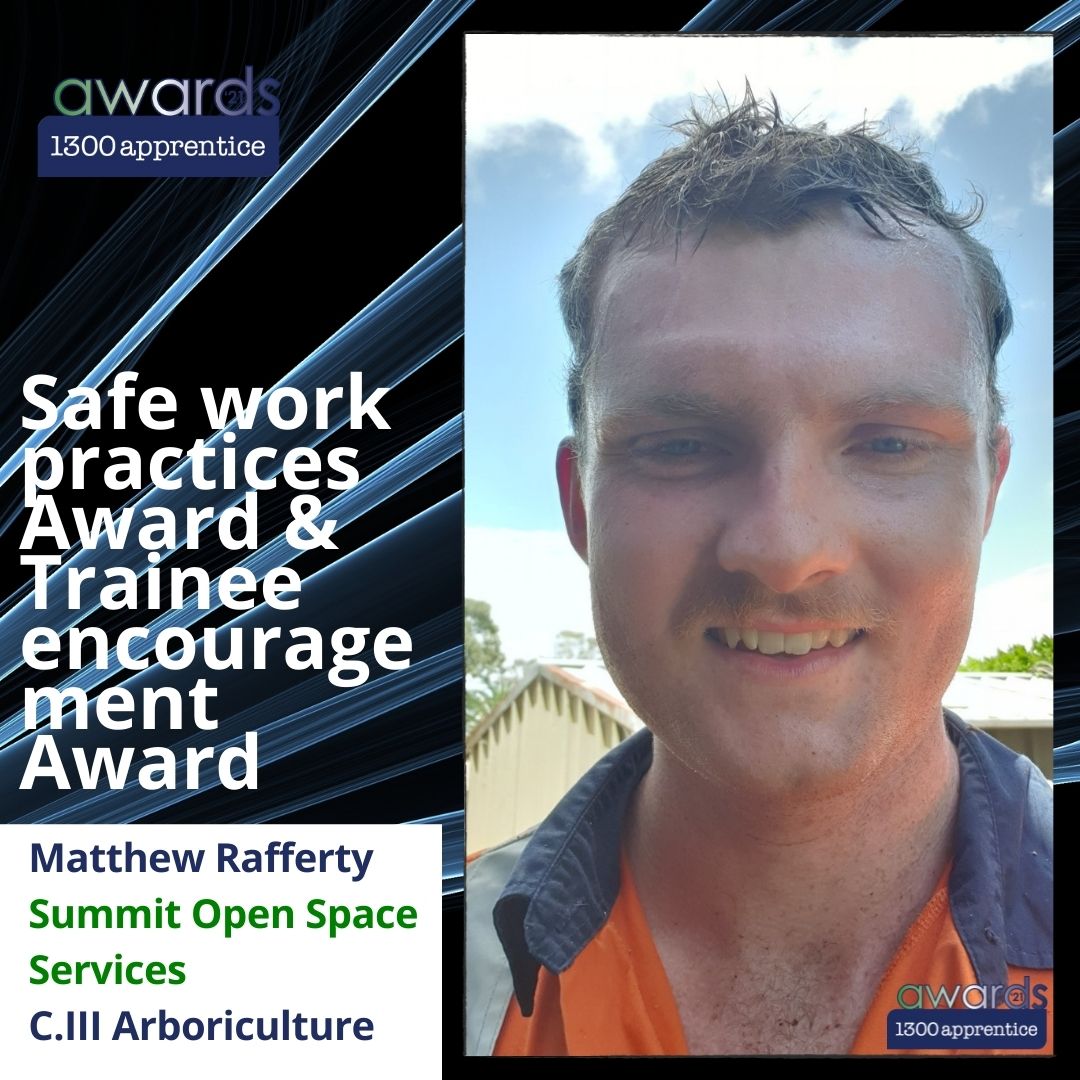 Matthew is currently studying a Certificate III in Arboriculture, a traineeship that involves chainsaw use, tree climbing, tree canopy management and tree removal, all tasks which require a high level of safety awareness.

During his traineeship Matthew has gone above and beyond to ensure his safety as well as that of his peers. Examples of his include using a motorcycle Bluetooth headset to be able to communicate clearly with his peer, creating a neck flap for his helmet to ensure his neck doesn’t get burnt and identifying a potential risk to one of his colleagues during a winching task.

Matthew’s host employer made comments that he is always asking questions and makes sure that he always follows safe work procedures. He is well regarded amongst the team and is a 5 out of 5 star apprentice. Matthew is engaging in his TAFE and it is noticed that Matthew is keen to grow his knowledge by practicing what he has learned in TAFE on the job and vice versa.

Congratulations Matthew, the team at 1300apprentice wish you the best for the remainder of your apprenticeship. 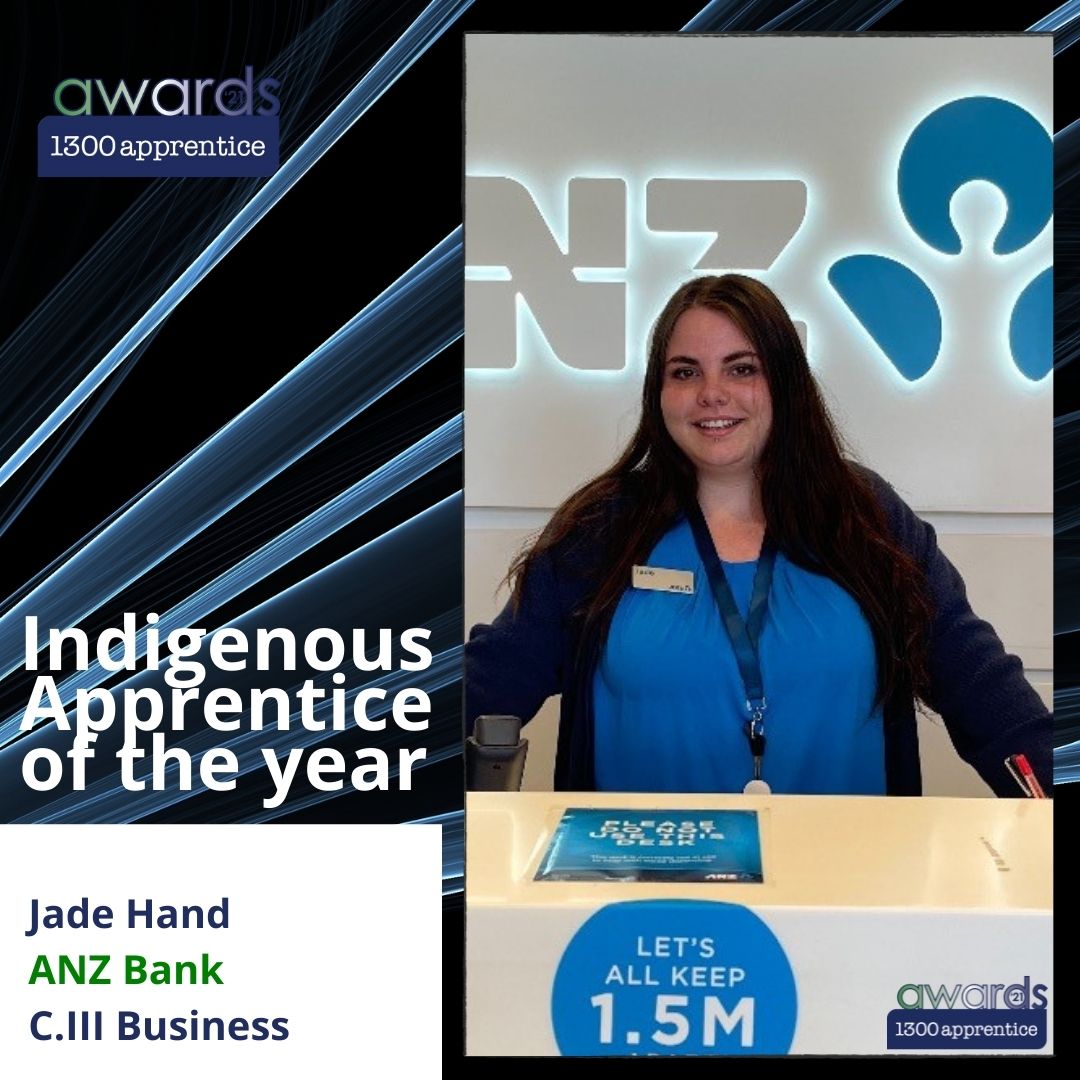 During her traineeship, Jade faced the challenges that COVID-19 placed on us all. At times, this made learning a challenge, yet Jade continued to ask questions, took notes and pushed herself to be the best that she could be. Jade sought feedback from her peers and manager and used this feedback to improve and advance her knowledge.

Jade is a proud Indigenous woman from the Dunghutti and Wiradjuri people. Hosted to ANZ Bank, Jade successfully completed a Certificate III in Business ahead of time and gained employment directly with ANZ Bank continuing to work on a casual basis.

Jade developed her skills to a standard where she could help other team members, this enhanced her confidence and demonstrated to her team members her ability to support others where needed. Throughout her traineeship, and in spite of the challenges of COVID-19, Jade has proven to be a valuable and reliable team member, also taking on further study to better support her team and customers.

Congratulations Jade, the team at 1300apprentice wish you the very best in your career with ANZ Bank. 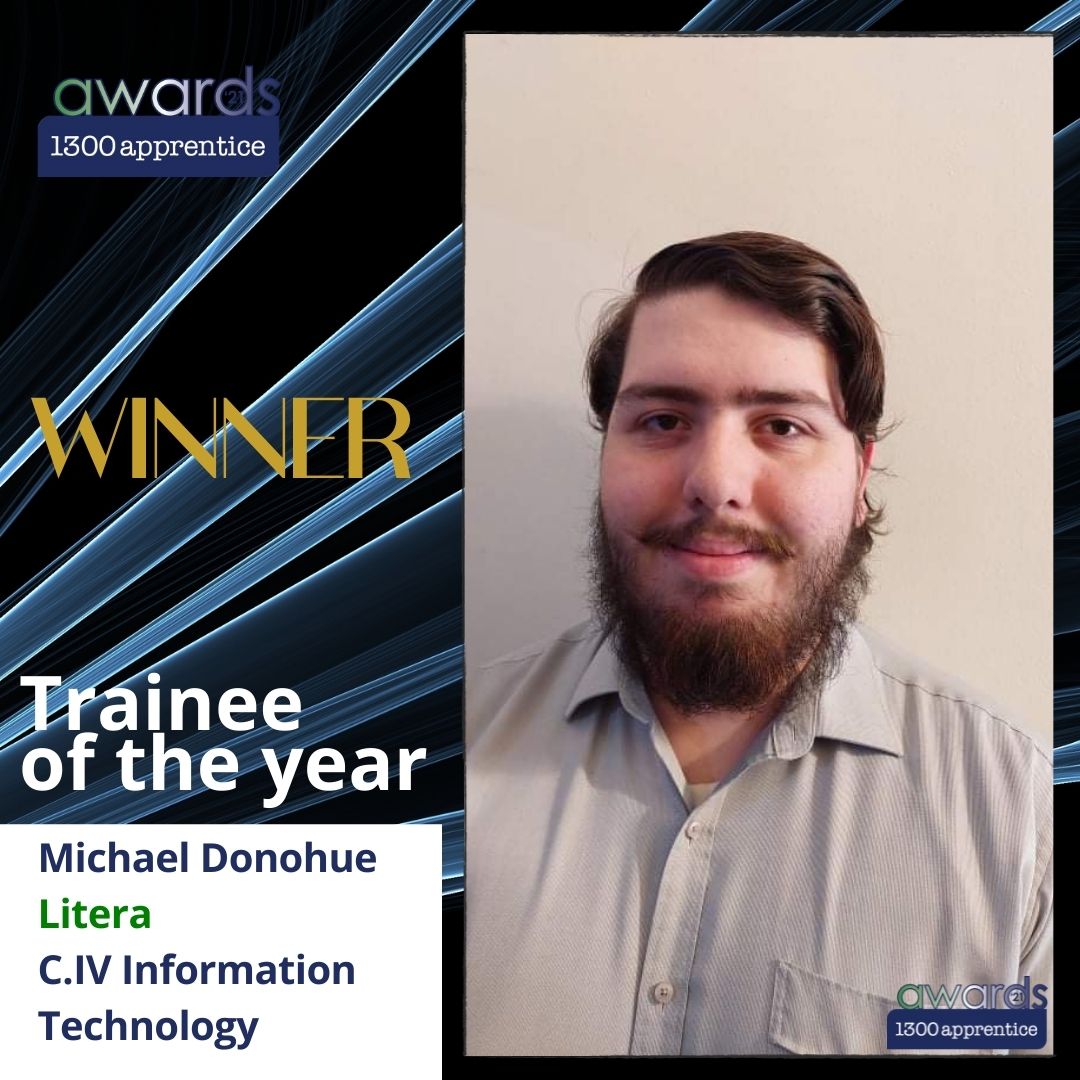 Trainee of the year, Michael Donohue

Michael began his traineeship with 1300apprentice to complete a certificate III in Information Technology. After completing his certificate III, Michael took the opportunity to roll into a Certificate IV. It was not always smooth sailing however. Through no fault of his own his studies were put on hold for several months. Michael was dedicated to his studies and when the time came – he leaped into action and was able to finish in time.

As an active member in Scouts Australia and St. John Ambulance as a first responder, he has been able to manage his time extremely well while balancing working from home and his community work.

Michael’s efforts have not gone unnoticed. His RTO has recognised him for all his achievements and awarded him the “Above and Beyond” Award which was supported by his host employer.

Michael mentions he received much support from both his field officer, host and RTO which has been the single best part of his traineeship. 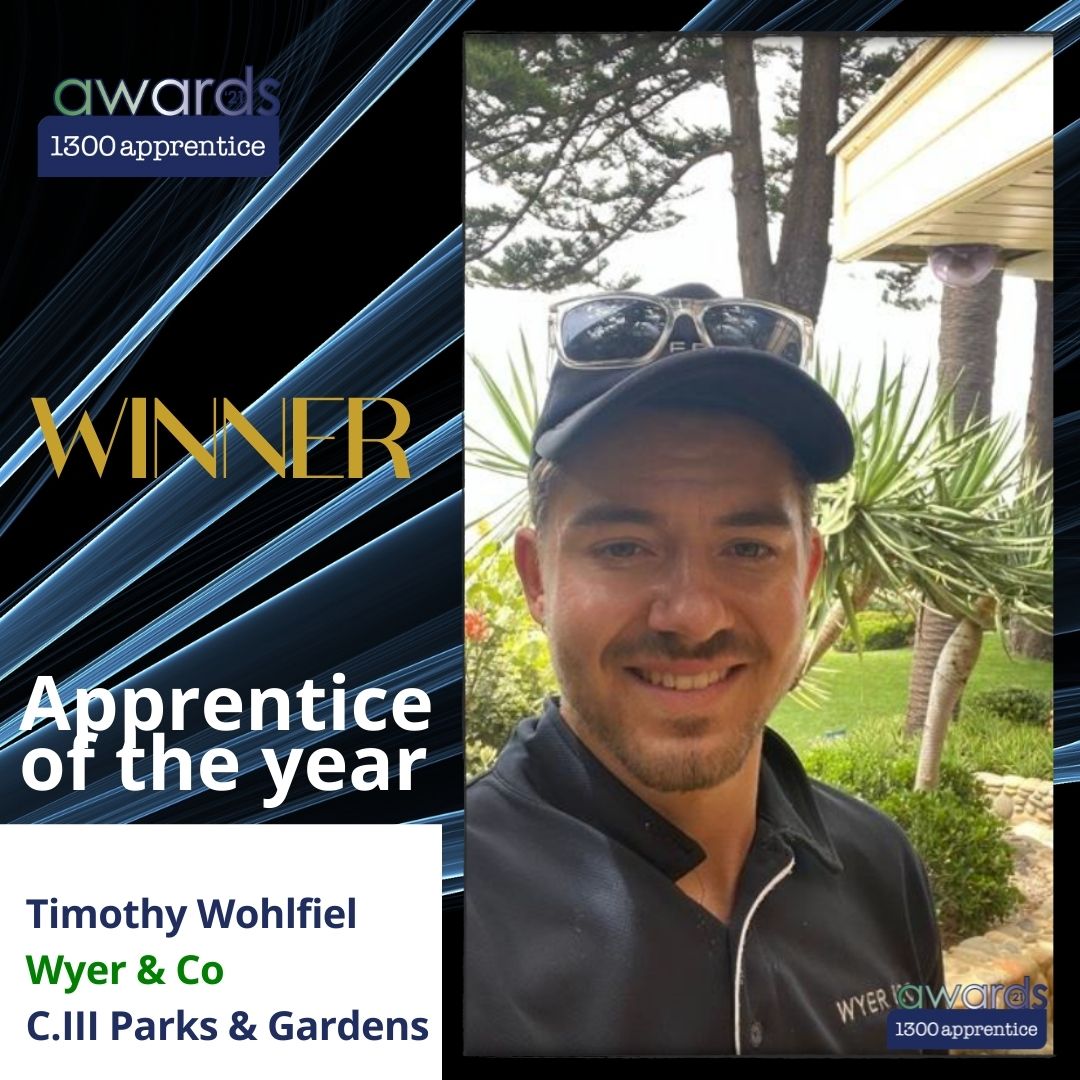 Apprentice of the year, Timothy Wohlfiel

Timothy started his parks and gardens apprenticeship as a mature aged apprentice. During his apprenticeship, he demonstrated a strong commitment to his trade and his host employer. He has built a strong reputation with his clients and quickly demonstrated his ability while maintaining projects which have been featured in well-known prestigious magazines. Tim’s inspiration comes from the desire to learn new things and the amazing backdrop of his office, the picturesque settings of Sydney Harbour.

Timothy delivers high standards with all projects he is involved in and has the ability to capture their vision and works with his clients to meet their expectations. In Timothy’s own words Ï feel very fortunate to have been hosted by Wyer & Co during my apprenticeship and to have been mentored by Luis who has fostered my enthusiasm in this career and continually shares his knowledge with me”. Timothy has early completed his apprenticeship and is now a tradesman and employed directly through his host employer.

We wish him all the best in his developing career. 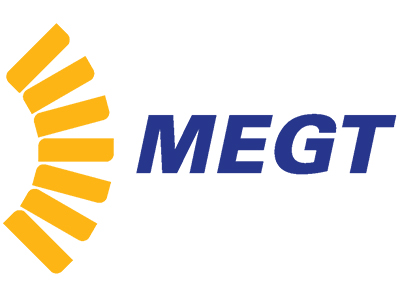 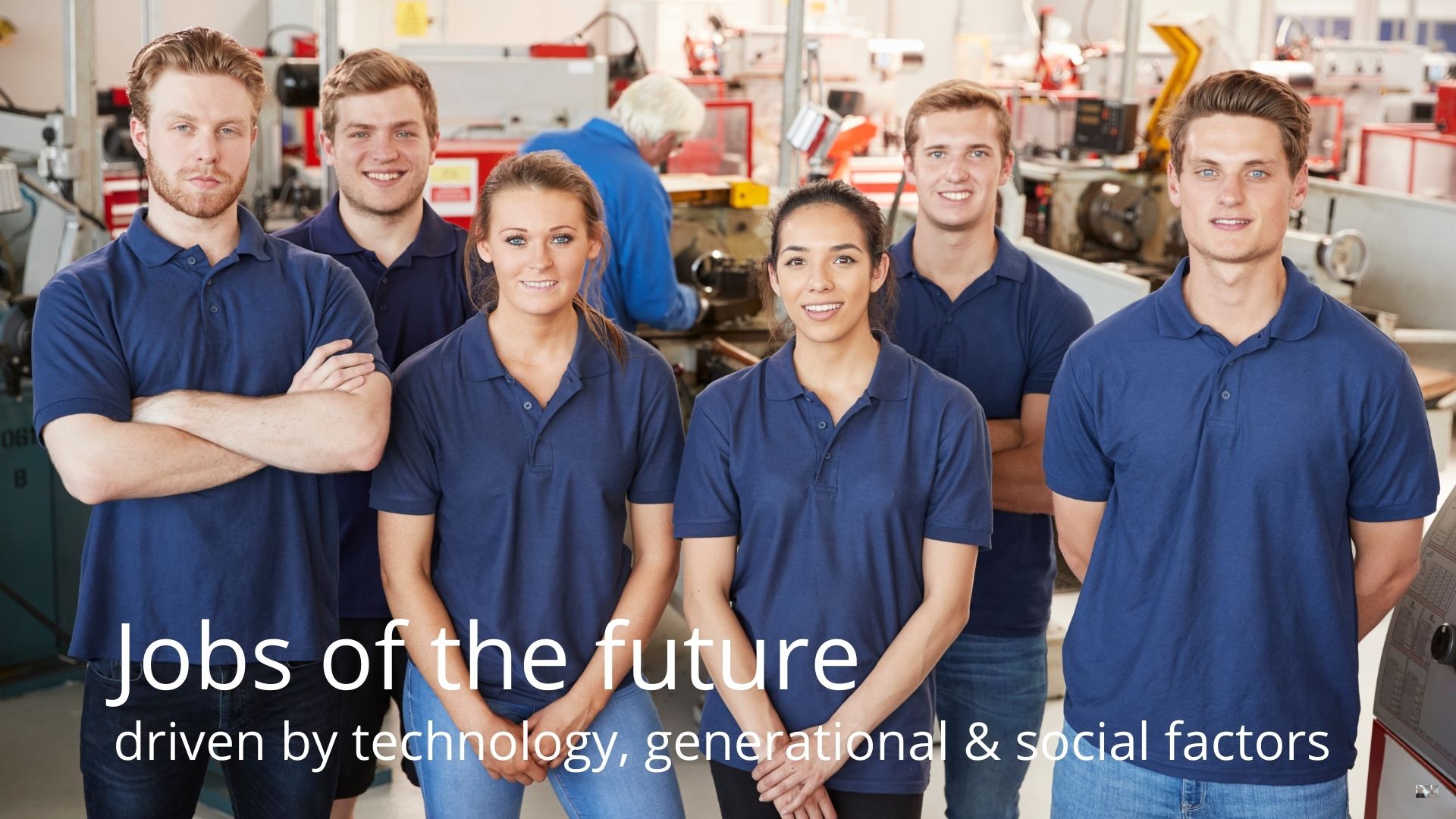 Jobs of the future 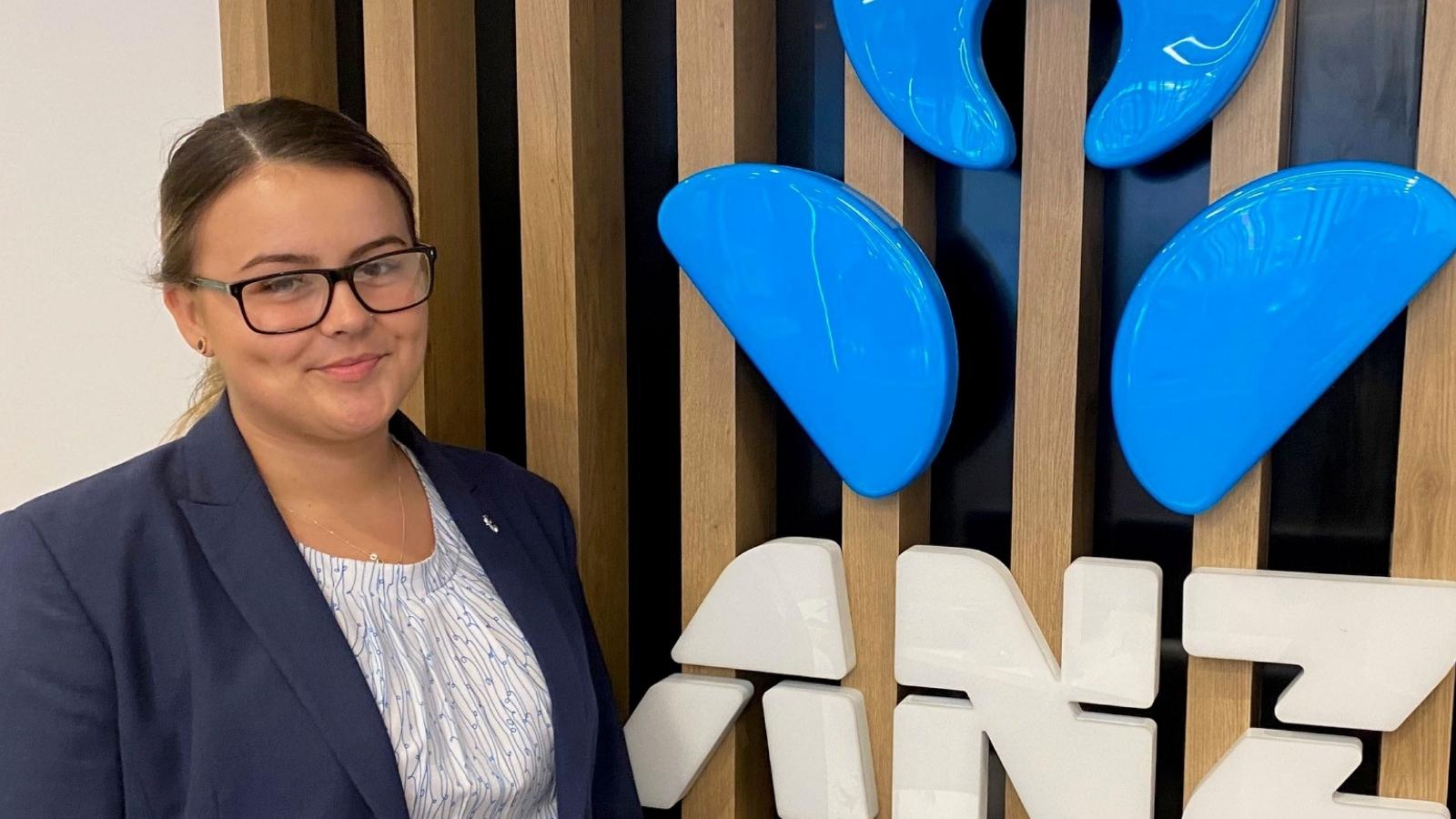 Where are they now – Abbey Graf 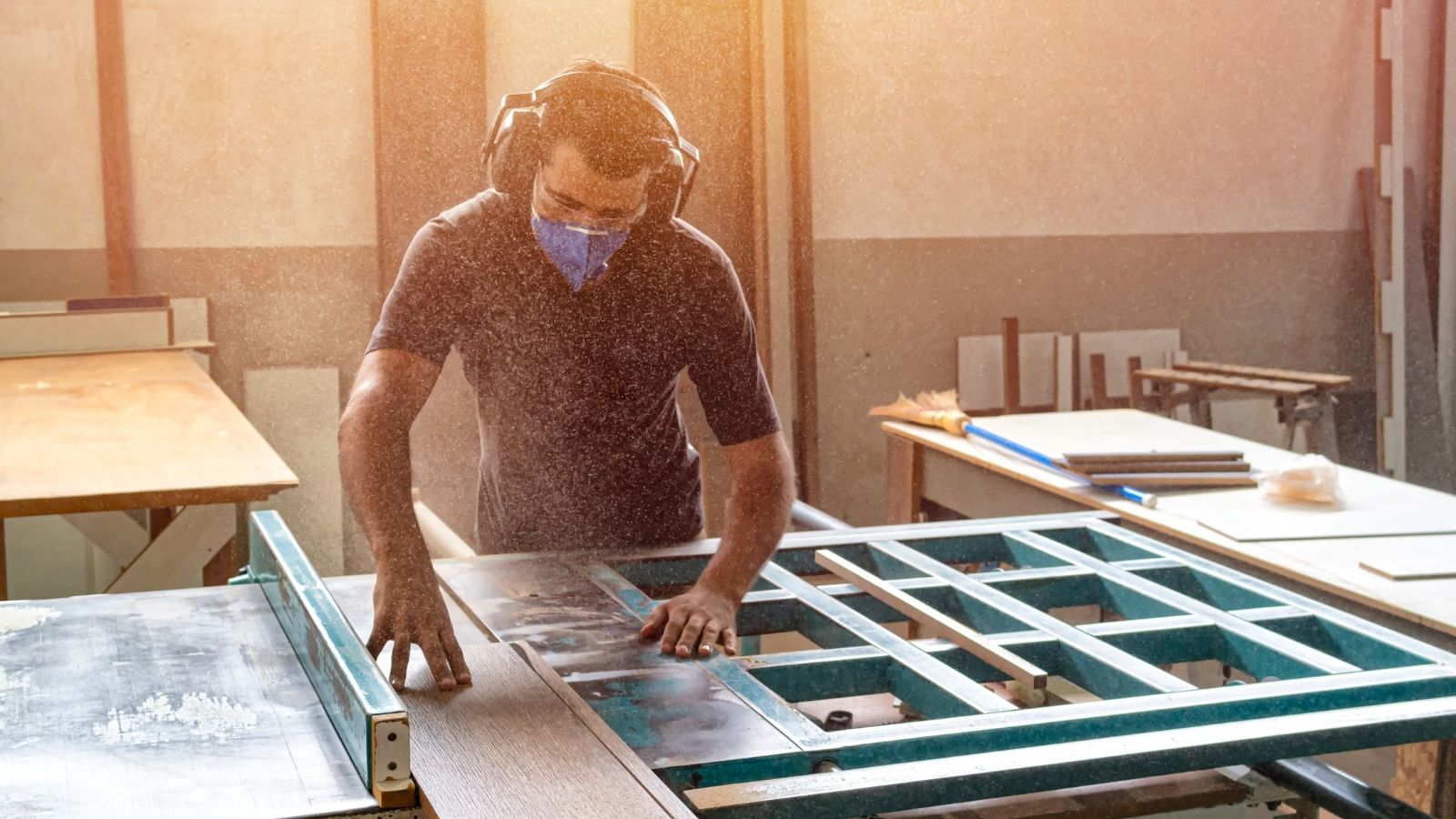 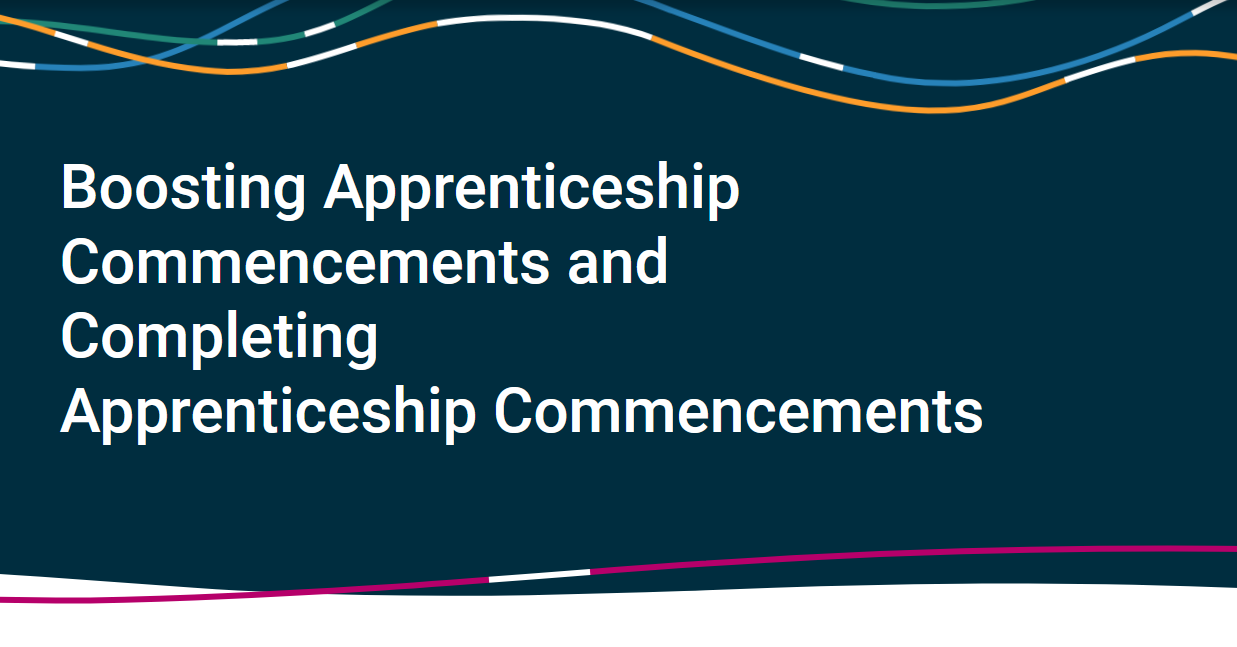